Create epic stories: big stories that will be split into smaller ones.

The stories of your Backlog are often of various sizes. Size differences are even more pronounced for the stories of your Sandbox since they have not be refined yet. Such stories are not ready to be estimated but the Team or the Product Owner may already know that they are too big so that they will need to be split into smaller stories.

When you enable it on your project, this App provides a new story type that helps recognize such big stories: the «epic story» type. 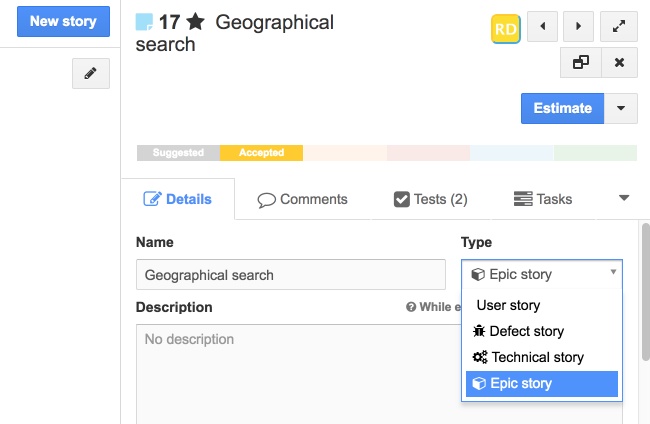 Epic stories cannot go further than the state «estimated» in the story workflow because they are too big to fit into a sprint. We recommend splitting such stories as early as possible so they should probably not reach the state «estimated». However, it is sometimes not until the planning poker session that the story is found to deserve the type «epic», that is why an estimated story can be defined as epic.

An epic story can easily be divided into smaller stories thanks to the «Split» menu. Be careful, epic stories are not a new level in the business item hierarchy of iceScrum: they are intended to be replaced by the smaller stories created when they are split, thus disappearing.

In iceScrum, the item level above stories is materialized by Features.

This App also adds a new menu that allows creating an epic story from a feature, which is a good way to transition from a feature backlog to a story backlog. 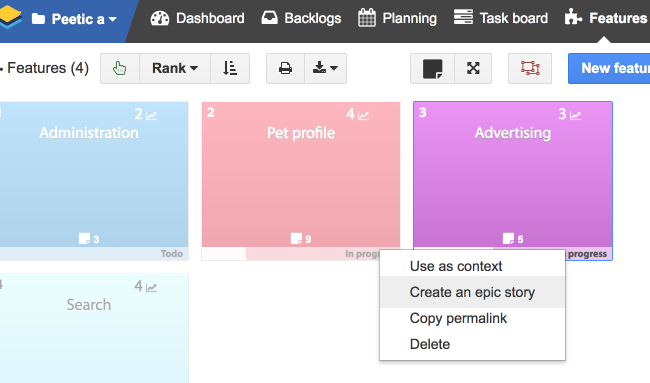 You can use this App in combination with story templates to prefill epic stories, e.g. with specific tasks. You can also create a custom backlog that lists such stories so the Product Owner can keep an eye on them to avoid having too many of them.